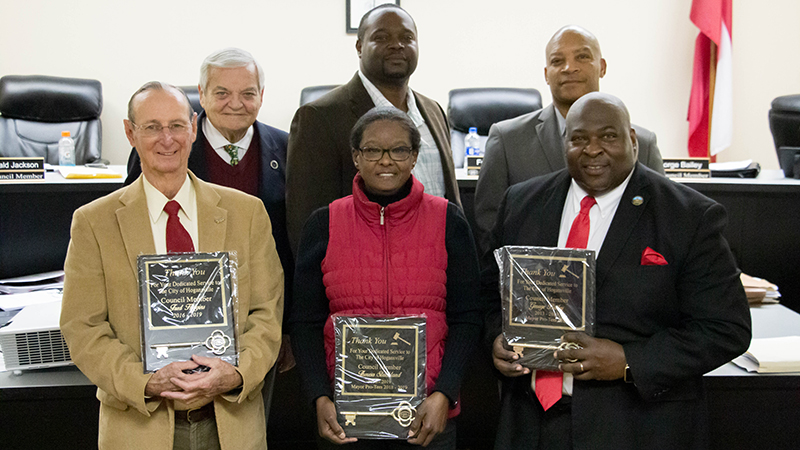 A Hogansville man would like to see a street renamed after a former city employee.

Tyrone Gates approached the Hogansville City Council on Monday night, asking that a street be named to honor Claude Gates Jr. Gates told the council the late Claude Gates Jr was a Hogansville employee in the electrical department from the 50s to the late 60s.

Gates said that Claude was the first African American electrician for Hogansville.

“Unfortunately, fate would have it, he lost his life on the job serving the community,” Gates said.

Gates presented the council with a request to change King Street in Hogansville to Claude Street or Claude Boulevard.

The council decided to table the request until they have accurate historical and legal information on the death of the employee.

Multiple members of the council also recommended possibly putting in a historical marker instead, at one of the parks in town.

During the meeting, the council also voted to approve budget amendments to the Local Maintenance and Improvement Grant funds.

“We will use those funds to help pay and finish the Lawrence Street project,” Hogansville City Manager David Milliron said.

Milliron also reminded the council that an auditor will come early next year to present the council with their audit and a statement of opinion.

Additionally, in August 2018, the Georgia Department of National Recourses reviewed the city’s historic preservation program. It requested that changes be made to bring the program into state compliance.

The council approved to replace conflicting sections in the city codes with an ordinance recommended by Georgia DNR. The replacement ordinance covers district designation and commission member responsibilities.

“This has been an education for me,” said Councilman Fred Higgins. “I have enjoyed it. I want to thank everybody for supporting me and helping me along the way. I’m glad I got to be with you guys for this time. I hope everyone will have a safe and merry Christmas. I will see you all around, because I’m not going anywhere.”

Councilman George Bailey said he is surprised he wasn’t reelected but thankful for the opportunity to serve Hogansville.

“I enjoyed council,” Bailey said. “I’ve met a lot of people … You’ll still see me. It is an ongoing thing, but I thank you all so much. We’re all looking forward to keep on moving forward.”

Councilwoman and Mayor Pro-tem Theresa Strickland said she was thankful for all the citizens.

“I really appreciate it,” Strickland said. “I made my mark here and made an impact on the city.”

Also during Monday night’s meeting the following items were discussed:

The Hogansville City Council will meet again on Jan. 7 at 7 p.m.