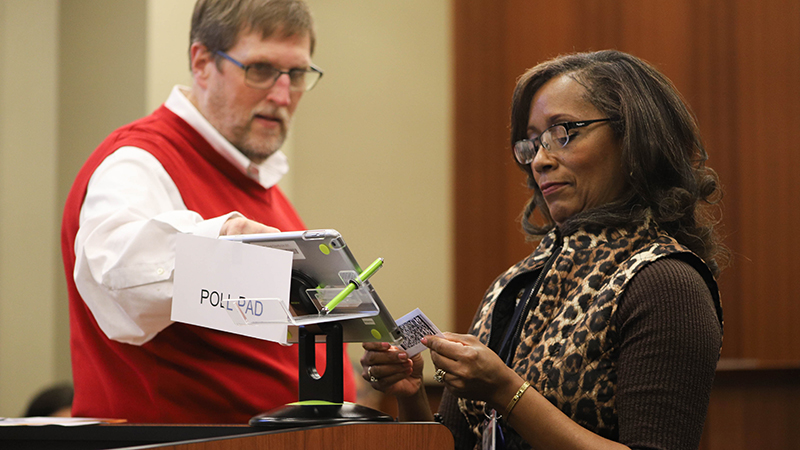 As like most Thursdays, the Troup County Board of Commissioners met for a work session, but this time, it was the first time meeting in the evening.

Per the discussions in October and decision in December, one work session and one commission meeting a month will be held in the evening.

The Troup County Board of Commissioners had received a request from members of the local branch of the NAACP and local Democratic leaders to consider holding meetings during the evenings in July.

During the meeting, the board received highlights and good remarks during its audit presentation from Susan Black with J.K. Boatwright.

Black said the audit was recently submitted to the Government Officers Finance Association for them to look over as well.

“Hopefully, you will get your 31st certificate of excellence in financial reporting,” Black said. “You’ve gotten it for the past 30 years, so hopefully you’ll get it for the 31st year.”

The commissioners will receive comments back from the state and GOFA later in the year on the audit.

Troup County is the 10th largest employer in the county.

“This county has one general fund, two debt service funds, 10 special revenue funds, four capital project funds, two enterprise funds, two internal service funds and Bank and Trust Fund. There are 22 funds in all. There are 57 bank accounts, and we look at all of them.”

Black said after looking at all of the accounts and funds, the county received an unmodified opinion.

“That is the best opinion you can obtain,” Black said. “No exceptions, no red flags, everything was in order. I’m really impressed with the different departments how they take to heart, their areas, and they know what they’re doing. A lot of times, they may not be the expert in the financial bookkeeping aspect of it, but they try real hard.”

The county’s general fund also had a net change of an increase of $2.4 million, according to Black. Additionally, the enterprise fund lost $302,000.

“Cash-flow wise, you also got in capital grants,” Black said. “You expanded, and your cash position went down $898,000 between those two funds, but you were paying back debt and acquiring capital items in excess of the capital grants. You had the money to do it, so that was good.”

Also, during the meeting, Election Supervisor Andrew Harper presented the commissioners with the new voting equipment and a request to purchase security carts to hold them.

“The purchase of the new voting equipment that we are needing to order…is going to be an enclosed cage with locks,” Harper said. “We’re trying to get everything in place before the march election.”

Each county has grant funds available to purchase the carts, but Harper said it only covers up to $15,000 and it is a 1:1 ratio.

According to Harper, the county will be reimbursed half of what they spend, up to $15,000.

One major concern that the commissioners brought up after a demonstration was shown was how it affected the speed of voting.

“We have a lot of unknowns at this point,” Harper said. “The time will probably increase a little bit. The only thing that will slow down is the check-in station.”

Harper said that it has already been tested in six counties this past year and will be used statewide in all elections going forward.

“The feedback that we have gotten is that it has slowed them slightly, but that is just because that was the first time using the machines,” Harper said. “We are working to train all of our poll workers to help them going forward.”

Commission Chairman Patrick Crews reminded everyone that early voting is always a possible alternative to avoid lines at the polls.

Also, during the meeting, Troup County Emergency Management Director Chief Dennis Knight reviewed with the council the Statewide Mutual Aid Agreement that will be voted on at the next meeting.

When disaster strikes and local governments need assistance, they call on the Georgia Emergency Management Act. The agency works with local, state, federal, volunteer and private agencies to respond to disasters or emergencies that require a coordinated response.

Knight said that the agreement provides the framework to support mutual assistance in managing an emergency or disaster.