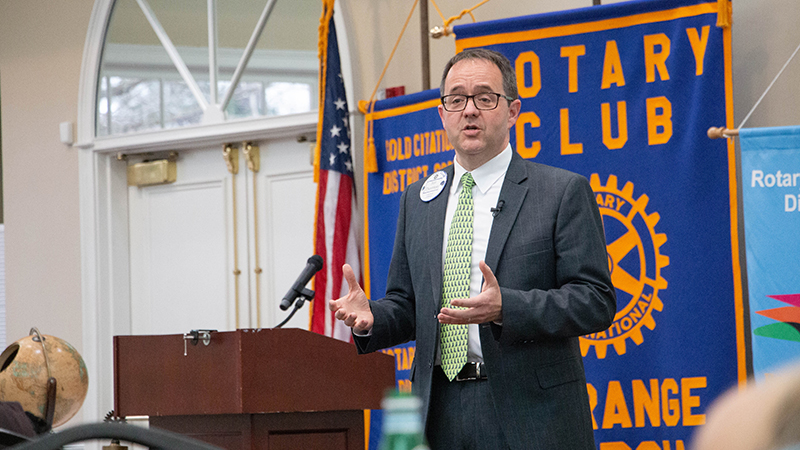 City of LaGrange Mayor Jim Thornton gave his annual state of the city address at the Rotary Club meeting Wednesday.

Most of the focus for the speech was what the city is doing well and how those positives can be sustained.

“The City of LaGrange is doing well financially,” Thornton said. “We have been on a multi-year year path of sustainable growth, and we haven’t seen that slow down. People ask me, as I go around the state, how are y’all doing well?”

Thornton said he always tries to reply in a humble way but points out that LaGrange is in a prime location.

“We’re on the interstate, we have a lake, we are less than an hour from the Atlanta airport,” Thornton said. “We have a tremendous amount of infrastructure in place and a great location to really do business. It goes back to years, really decades of very progressive, thoughtful leadership. How can we sustain, and how can we keep it moving?”

According to Thornton, population numbers are on the rise and unemployment has stayed low.

He said the theme of his talk was not about all of the good, but what does the city can do as a result of it.

One of the first highlights Thornton hit on was public safety.

“Public Safety is the first and principal responsibility of local government,” Thornton said. “When you pick up the phone and you call 911, whether it’s a police call, fire call or medical call, if you’re in the city limits of LaGrange somebody from our public safety departments is going to respond.”

The LaGrange Fire Department has reduced response time by 16 seconds.

“We have the resources to enhance our fire service and when you’ve done that in the past year by opening the Kay Durand station out on Vernon Road, which has helped us with our coverage on the west side,” Thornton said. “Now, that doesn’t seem like a long period of time, [16 seconds,] but when you’re talking about a life or death situation, that can be critical.”

Additionally, LFD’s new burn building and training center on LukKen Industrial is expected to be completed within the next few weeks. The facility was funded by SPLOST and the Callaway Foundation to provide more training for fire personal.

Thornton said that at a recent GMA convention for public safety, LaGrange was recognized for its initiatives against gang violence.

“He [Rep. Carl Gilliard] specifically singled out LaGrange as one of the communities that is doing it well, that is doing it right,” Thornton said. “He applauded Chief Lou Dekmar, and the members of the LaGrange Police Department for their response to gangs and youth violence in our community. What Rep. Gilliard said was, unlike most cities that have gangs … unlike most cities that deny the problem, LaGrange got ahead of them.”

The LPD is offering multiple programs in the community to combat those threats to public safety. It also collaborates with the Georgia Gang Investigator’s Association and FBI Safe Street Task Force to help with gang issues.

Thornton said the LPD also reaches out to the school system, the housing authority, youth groups and other entities to help redirect the younger generation who are at risk of falling into gang violence.

Thornton said parks have also been a major topic for the city.

The Callaway Foundation also recently approved a grant funding the city for construction of a new restroom facility.

In August 2019, a new Convention and Visitors Bureau was established. Additionally, Visit LaGrange announced a few weeks ago Kathy Tilley as the President and CEO of the organization.

“We want to hear from you about how you would like to see us evolve the city. That requires community engagement. It requires not just you talking one on one to me and council

Members, but it requires us all to have community conversations,” Thornton said. “The Thread is an example of that.”

The mayor finished his update by telling about his experience at Granger Park one month ago.

“It was a beautiful Sunday afternoon, warm for a January day,” Thornton said. “I think I said I was going to run 12 times, and only made 10 times. Making those ten laps around the track on the Sunday afternoon, there were there were two families playing soccer on the grassy area … the basketball court was full … I see the tennis courts were full … kids on the playground, and I knew Corinne was out walking on the Thread. That’s why we do this.”

Thornton said he doesn’t own a tennis racket, but many others do, and the Granger Park area is visited by a diverse group.

“And let me tell you, you will not have found a more diverse group of people,” Thornton said. “Ages from two years old to probably grandparents over on the playground. I saw white, African-American, Latino, Asian. There was a lot of activity, and it was a picture of what community really looks like. That doesn’t happen by accident.”

Thornton said that the LaGrange community has become so viable because it has come together in support of one another.

Thornton asked the group to share that idea of community to help combat individualizing the city and losing relationships it has made with other cities, local government entities and other organizations.

He added that everyone in the city needs to be in this together.

“When someone says, ‘I don’t know why they’re spending so much money on Hamilton Road,”’ Thornton said. “Well, there is probably a lot of people who drive down the road every day that never drive down Vernon Road. But you want the road to be there just like you want the fire department to be there.”

Thornton said that he has never had to call the fire department, but he is glad it is there.

“Corinne and I have not been blessed with children, so we don’t have any children in the Troup County School System, and I pay thousands of dollars every year in school tax. I am delighted to do it. I am proud to do it because I want to live in a community that has a great public school system. I want to live with a community where everybody is well educated and intelligent and thoughtful and the way that happens, is by investing in our public-school system.”

Thornton asked the crowd to hold its city officials accountable, including him.