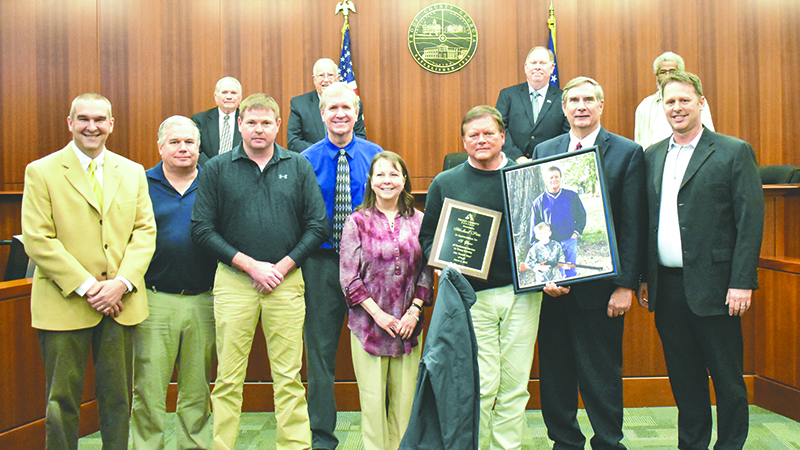 Several employees were honored by the Troup County Board of Commissioners Tuesday morning, some dating back to the mid-70s.

Michael Pitts, manager of the recreation center in Troup County, was honored for his 45 years in service. He was hired in 1972 as a part-time lifeguard for the West Point Recreation Department and later was hired on full-time in 1975. In 1979, he was promoted to area director of West Point and Troup County parks.

“He was hesitant to take the position in 1979, and little did he know what a positive effect that decision would have on the citizens of Troup County,” said Lance Dennis, director of Troup County Parks and Recreation. “I am honored to be on a staff with a man with so much dedication and experience.”

Pitts was given a plaque and a framed photograph of himself and his son. Dennis said as a park and recreation employee, it’s not an 8 a.m. to 5 p.m. job. He said it requires many weekend and evening hours at the park or in the gym.

“There’s a huge sacrifice and time that people in parks and recreation do, and many people don’t notice,” he said. “And sometimes, that sacrifice takes away from our family time.”

For 40 years of service, State Court Judge Jeannette Little was also honored with many of her family members in the commission chambers.

“I just want to say that I have really enjoyed serving alongside you,” he said. “You are a pleasure to work with and always a wonderful counselor.”

Little said Tuesday she’s not running for reelection in 2020 but plans to still be active in the legal community.

“I felt like my time was called to retire, but I’m going to miss it because it’s been an extreme blessing,” she said. “And I’ve loved every day of it, and I intend to love every day of it until Dec. 31 of this year.”

Little said she has been doing the job she was called to do and never felt like it was a job.

“I feel like I had been in the place where my creator meant for me to be, and I thoroughly enjoyed it,” she said. “And if you have a job that you love doing, it’s never really work.”

Three employees were celebrated for 30 years of service Tuesday.

Major Keith Flory of the sheriff’s office said Williams has booked more than 10,000 inmates and trained more than 300 detention officers throughout her career.

“She’s like a sister to the older jailers and a mother to the new ones,” Flory said. “Jennelia is and has always been the backbone of the generation.”

Also in the sheriff’s office, Richard Sexton received a plaque for 30 years of service with the county.

Like Williams, Sexton started on Jan. 25, 1990, as a detention officer. Flory said Sexton is known as the “Eye in the Sky” because of the time he spends watching cameras.

“Ricky constantly watches the camera and is observant of the smallest of details,” he said.

Flory said Sexton is also known as the “Narrator” and starts his stories with “to make a long story short.” Flory said the joke is that Sexton’s stories are never short.

“I’m glad that he chose this career because the jail is a much better place with you,” Flory said.

Lonza Edmondson was also honored for 30 years with the sheriff’s office.

Throughout his career, Edmondson has been a jailer, deputy and investor. In 2006, he was appointed as chief marshal.

For 15 years, Eric Chelcy, Frankie Mayor Keith Mitchell and Rodney Williams were also honored for their time with the sheriff’s office. Tammie Owens also received a 15-year plaque for her time in the tax commissioner’s office.

At the beginning of the meeting, Dan Wooten, aging services manager in the parks and recreation department, was given the county’s strongest link award.

The award is given to an employee who demonstrates excellent performance, productivity, loyalty, professional pride and other noteworthy accomplishments, according to Wesleigh Whittle, administrative assistant for the Troup County Human Resources Department.

“He has built an incredible reputation for his dedication, vision and work ethic throughout his tenure. He is a team player. He is kind, honest and fair,” Wesleigh read from Wooten’s nomination form. “He is a leader, a teacher, encourager, and incredible worth of knowledge. His principal belief is that building a great team success will follow.”