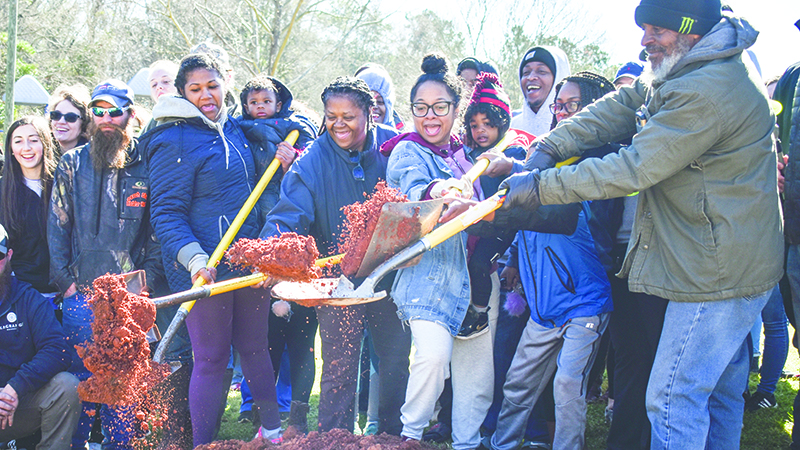 Members of the Bell Line community shovels dirt into a hole designed for a new tree.

The city of LaGrange and LaGrange College partnered Saturday afternoon to plant trees, build fences and clean up litter around the Bell Line neighborhood at Jones Street Park.

The group picked up litter around the neighborhood as well as spread mulch around the playground and pine straw around bushes and trees in Jones Street Park. WellStar West Georgia Medical Center also provided wellness checks for anyone who wanted one.

There were about 100 people in attendance for the litter cleanup, according to the city. LaGrange Mayor Jim Thornton said it was great to see the participation from LaGrange College students.

“Some are from LaGrange, most of them aren’t, but they are part of our community, and they are giving back as part of a service project,” he said.

Thornton said he was also excited about the beautification of the Jones Street Park. He said it’s been a priority project for the council for several years.

After the cleanup was over, the city hosted an Arbor Day celebration and planted a tree.

Alton West, community development director for the city, said LaGrange had been recognized as a tree city for more than 19 years.

He said being a tree city means the city must observe Arbor Day and have a tree ordinance.

“We have two arborists on staff, and whenever we have a tree that looks to be diseased or a danger to our power lines, they go out and make an assessment,” West said.

He said based on that assessment, it’s determined if the tree can be saved or removed.

West said the city has also made a concerted effort to plant trees throughout several neighborhoods and parks in the city.

Councilman Jim Arrington, who is also on the LaGrange Tree Board, cited a Chinese proverb with the group.

He said he believed in that proverb and hoped the tree planted Saturday would be here for future generations to come.

Former LaGrange Councilwoman Norma Tucker said the tree represented a new beginning Saturday. She said she recognized people from the Bell Line community but also from all over LaGrange.

“For everybody who is here today, I wanted to say thank you,” she said.

He said the park had a dilapidated building, faded lines on a basketball court and a space that needed love.

Thornton said the city is reimaging its park spaces and green spaces for more opportunities to plant trees, and part of that is cleaning up the trash.

“This work will continue,” he said. “I look forward to seeing more and more opportunities for activities here in this space and the transformation of this entire neighborhood.”

At the end of the ceremony, members of the Bell Line community were the first to shovel dirt into a hole, designated for the planting of a new tree.