Shriners Club of LaGrange asks to collect money on the square 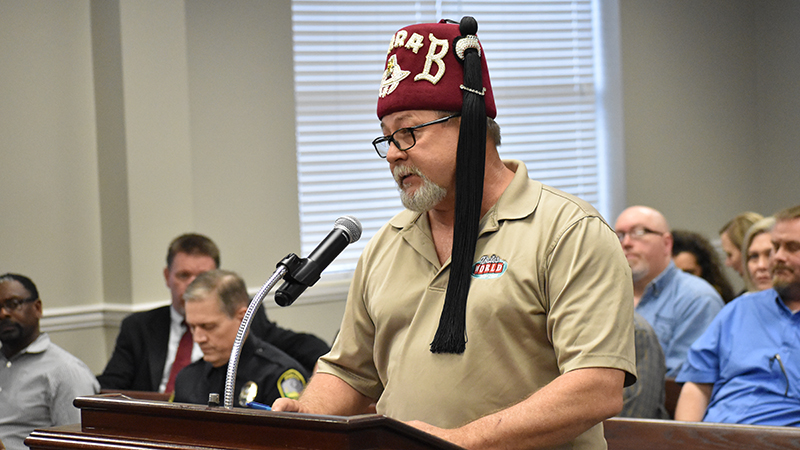 The Shriners Club of LaGrange is asking to collect money on the square in downtown LaGrange while cars are stopped at red lights.

In 2018, the LaGrange City Council changed its code to disallow solicitation on the public right away, LaGrange City Manager Meg Kelsey said during a work session Tuesday.

During the business meeting in the evening, Shane Bates, first vice president of the LaGrange Shriners Club, said the local club donates more than $25,000 a year to keep local hospitals open to help young children. The city gave $6,250 when it funded agencies in 2019.

Bates noted the funding and thanked the council but said the Shriners Club still has a shortfall of more than $10,000.

“As we have shared in the past, it takes more than $1 billion a year to operate our hospital at no cost to any child,” he said. “With all that being said, it affects our bottom dollar when we don’t fulfill our obligations, which we have taken and will eventually affect the hospitals.”

In August 2018, the city council voted to ban roadway solicitation based on a recommendation for safety from the LaGrange Police Department.

“This is one of those predictable surprises, where when we have a bad outcome, all of us have talked about it,” Public Safety Chief Lou Dekmar said in August 2018. “Based on public safety, the traffic, frequent complaints and the alternatives that are available that others have sought — which is you talk to Publix, you talk to Kroger, you talk to Walmart — they are able to solicit folks who are pulling into the parking lot as opposed to wandering out into traffic. From a public safety policy, it just urges the council to consider abandoning this practice.”

On Thursday, Dekmar reiterated his recommendation, saying the police department received numerous complaints prior to the enacting of the current ordinance.

“Since it has been in effect, no complaints regarding this issue has come to my attention,” he said. “If the council decides to modify the ordinance for one group it would require equal access for other organizations.  Consequently, based on complaint history prior to the ordinance, public safety, vehicle traffic flow, and enforcement challenges a modified ordinance would create, I would not recommend a change in the current ordinance.”

Bates said the Shriners Club is only asking to collect money in buckets around the square.

“No hot parts of traffic, no four-lane highways, something that’s a little bit safer,” he said. ”Something that we can try to put that little bit of extra money we are missing back in our pockets.”

Bates said the club has tried to collect money outside of Kroger but hasn’t received a green light to do so.

“We are here to raise money to give to our hospitals,” Bates said. “We do this with no profit to us. No Shriners has ever made a penny from collecting money. This is all volunteer.”

Mayor Pro-Tem Nathan Gaskin said the council would take the request under advisement and thanked Bates for what his organization does. The council did not make a decision on the request Tuesday.

At the work session, Kelsey said the prior process of collecting money on the public right away involved getting a permit through the city, with a name of the organization, the purpose, the hours the group would be out, the estimated number of participants and they had to be 16 years old or over. Kelsey’s office or her designee would then approve the request.

Mitchell said at the work session that the issue isn’t the Shriners, but if you allow one group, it would be tough not to allow every group who wanted to solicit with the proper paperwork.

“The problem is that if you restrict one and you don’t restrict everybody, you are setting yourself up for a lawsuit,” he said. “Why is it fair for them to collect but not for 15-year-olds on basketball teams?”