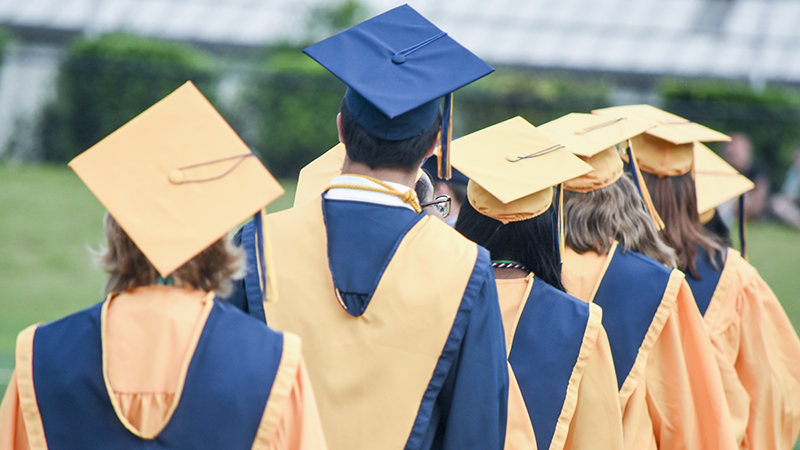 Troup High School graduates walk on the field at Callaway Stadium in May. --File Photo

The Troup County School System has announced it will make a final decision on high school graduations by May 7.

Due to COVID-19, Georgia Gov. Brian Kemp announced the closure of all schools within the state, including TCSS, which has been out of the classroom since March 12.

At the April 13 TCSS Board of Education meeting, Superintendent Brian Shumate indicated the district’s desire to still host in-person graduations.

On Tuesday, the district put out three options as to how the district will move forward based on the decision coming by May 7.

Option one includes hosting the regularly scheduled ceremonies on May 21, 22 and 23 at Callaway Stadium. However, a news release from the school said tickets may be limited due to social distancing guidelines and graduates may need to sit farther apart on the field.

The virtual ceremonies would be live-streamed on the TCSS Facebook page and posted on the school websites and district website that Monday. The scheduled times for those virtual graduations are at 4 p.m. for Callaway High; 6 p.m. for LaGrange High and 8 p.m. for Troup High.

TCSS said the decision would be based on state and local health guidelines. Those ceremonies would be held at Callaway Stadium on July 23 for Callaway; July 24 for Troup High and July 25 for LaGrange High.

“Troup County School System realizes the importance of commencement ceremonies for seniors and their families,” a statement from the school system said. “Principals and system leaders say the decisions will be made to allow every opportunity for the community to celebrate this monumental occasion. Individual schools will offer more guidance as the dates for these options grow closer.”

The school system also announced Tuesday it would have to postpone its budget hearings for the 2020-2021 operating budget due to uncertainty and pending developments at the state level.

A news release from the school system said the recommendation comes from Phil Hartley, an attorney with Harben, Hartley, and Hawkins, LLP and general counsel to the Georgia School Board Association (GSBA).

“Everyone needs to think very carefully about putting off your budget hearings until we are sure what the state is going to do in terms of the budget,” Hartley said in a news release. “We don’t want to get ahead of what the state revenues are.”

The state legislature is not due to reconvene until June.

According to a news release, as new budget information is received, the school system will reschedule its two required budget hearings in June. The current budget proposal will be tabled until more information is available from the state.

LifeSouth, Nutwood Winery and local church team up for…