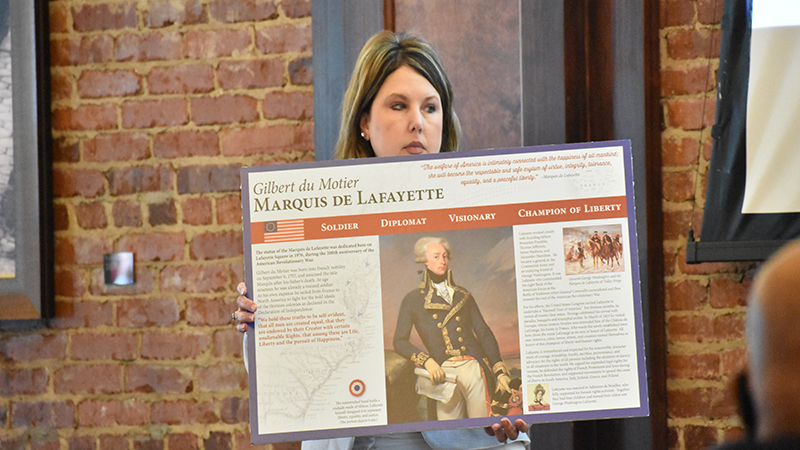 LaGrange’s namesake, Marquis de Lafayette, may soon have more information surrounding his statue placed in the center of downtown.

Joanna Baxter, representing the Lafayette Alliance, presented the council with a sign and informational board to be placed in the square near the statue.

“The purpose of his board is to provide information to the viewing public about who the statue is and his importance in the history and formation of our country,” documents presented to the council read.

The Lafayette Alliance is a LaGrange non-profit organization that seeks to educate, inform and inspire the general populace about the Marquis de Lafayette, according to its website.

Baxter said the alliance hears a recurring question about the nature of the statue in the middle of LaGrange and who that person is.

“His story is worth knowing, and LaGrange should be proud of his association to here,” she said. “This is just one more step to try to get information across.”

The board briefly tells the story of Lafayette fighting with soldiers during the Revolutionary War and his close relationship with the first U.S. President George Washington.

After the war, the U.S. Congress invited Lafayette to take what is now known as the “Farwell Tour of America.” He visited 24 states over 13 months, and when in Georgia, the area reminded him of his home in France — Chateau de Lagrange. Afterward, LaGrange was named in Lafayette’s honor.

Baxter said the alliance felt more signage might be attractive to visitors to the square, especially with the high foot traffic and hotel in the area. She thought if the sign were placed near information about Lafayette already near the statue, the two things would complement each other.

Baxter said the sign was a gift to the city from the alliance, and they had paid local designer Katie Roberts to create the design concept. A replica of what could be placed at the location was visible for council members Tuesday. Baxter said the sign would be 20 feet by 30 feet and about 32 inches tall from the base of the sign.

“The life and actions of the Marquis de Lafayette were based on a strong, underlying sense of values — loyalty, friendship, perseverance, sacrifice, courage and equal rights for all mankind,” documents to the city council said. “It is the desire that the written information on this board will also convey this to the viewing public and possibly even create a special take-away thought for a visitor.”

Mayor Jim Thornton said he felt it was a great idea and would be helpful to visitors coming into the city. However, he said his only concern would be how it was mounted and that it would conform to the signage already in downtown LaGrange.

He said he would like the colors of the sign to be similar to what is already in the area, so it looked like an intentional blending.

Councilman Nathan Gaskin suggested adding a QR code to the sign so visitors could use their smartphone to look up additional information about Lafayette while at the location.

The council approved the acceptance of the gift, and city staff will install the sign.