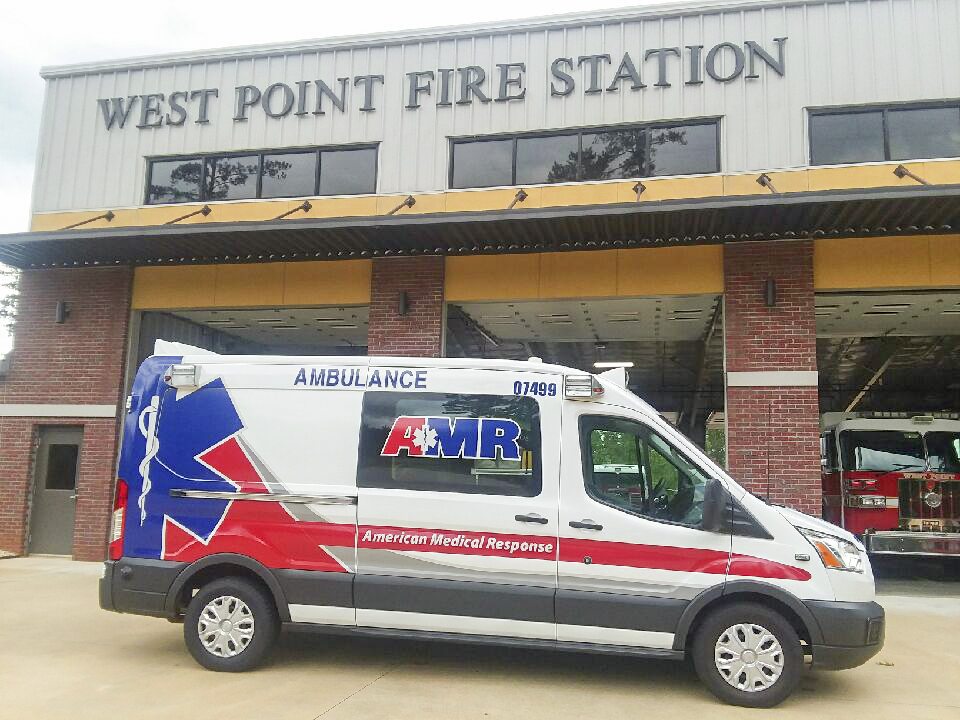 An American Medical Response (AMR) ambulance is parked outside of the West Point Fire Station. The two entities have formed a partnership to serve the citizens of Troup County.

The West Point Fire Department and American Medical Response (AMR) in LaGrange have formed a partnership to ensure the medical needs of Troup County residents are met.

West Point Fire Chief Mitt Smith said five firefighters were tested for COVID-19 after possible exposure to the virus. He said those tests came back negative, but it did cause the firefighters to self-isolate for some time.

With those firefighters out of work, Chris Hunter, division chief for AMR’s Southeast Region, said AMR received a call from West Point asking for assistance so residents in the area wouldn’t suffer.

“We gladly said yes because we support the fire and safety departments,” he said.

Hunter said there’s an agreement to provide an ambulance and two staff members to the fire station. He said AMR couldn’t dedicate those resources 100 percent of the time because if there were a shortage in other parts of the county, AMR would need those individuals to respond. However, both parties said the partnership has worked out well.

“It’s been a great partnership,” Hunter said. “They welcomed us with open arms down there.”

The partnership started on March 30, and while Smith said the West Point Fire Department is back to full strength, Hunter said AMR staff is still there.

“This has worked very well as 90-95% of the time we now have two EMS units in town in service, at no additional cost to the city of West Point,” Smith said.

Hunter said he doesn’t know how long it will last, and the private company has plans to be there as long as needed.

AMR and the fire departments within Troup County have established good working relationships, according to Hunter. He said AMR assists most of them with medical supplies at no cost and has donated equipment.

“Anything we can do to help them, we will, have done and will continue to do,” Hunter said.

Just because AMR is providing resources to West Point, Hunter said that doesn’t mean the company isn’t prepared to respond to all medical calls beyond COVID-19.

He said the company wants to make sure people feel comfortable calling them regarding heart problems, symptoms of stroke or other severe conditions.

“No matter what it is, they can feel comfortable calling us,” Hunter said.

He said people still have heart attacks and strokes during the COVID-19 pandemic, and AMR has seen a decrease in the number of heart problem calls, but an increase in cardiac arrest calls. Hunter said this is due to people ignoring their problems and waiting until the last minute to call 911. He said AMR takes specific steps to disinfect their trucks between each call, and the hospitals are open and can protect them from the virus.

“All the preventive measures are there,” Hunter said. “They just need to call when they really do need us.”