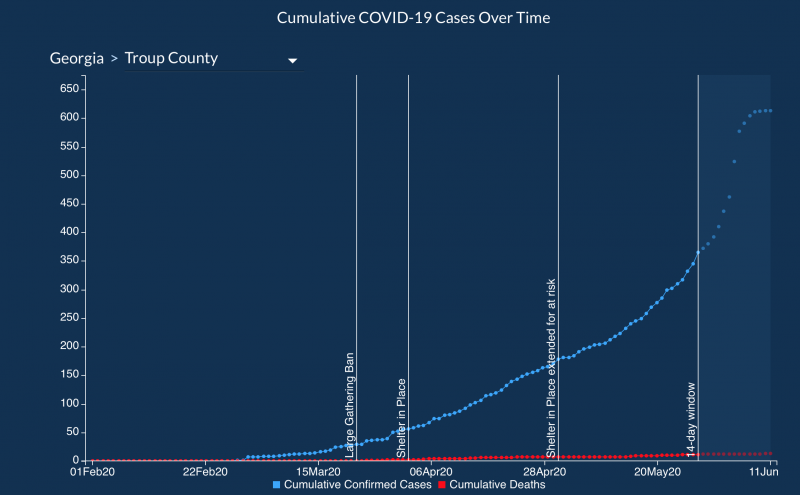 COVID-19 appears to be spreading rapidly in Troup County, based on the latest numbers from the Georgia Department of Public Health.

There are 615 confirmed cases of COVID-19 in Troup County and 13 COVID-19 related deaths. Two deaths have been added to the numbers over the last 24 hours, though GDPH lists them as occurring on May 29 and June 10.

According to Hayla Folden, Public Information Officer for GDPH District 4, the numbers have spiked, increasing by 174 positive cases since Monday.

To compare, as of May 1, there had only been 178 total cases in Troup County, according to GDPH numbers. Since that time — a span of 41 days — there have been 437 new cases, an average of just over 10 a day.

There have been 95 total hospitalizations in Troup County, according to GDPH numbers.

Folden said the increase in cases is due to community spread of virus.

A recent press release from GDPH said the increase may continue for several weeks as the timeframe of being exposed, having symptoms, getting tested and receiving results can be up to 21 days.

“There are more opportunities now to get tested, but we don’t know the exact numbers of how many people have been tested with the new sites available now,” Folden said. “There has been more opportunities, more people talking about it and more community spread. We are seeing it spread from person to person, where people are not wearing a mask and maintaining that six-foot distance.”

Folden said the most recent major outbreaks have been at LaGrange Nursing and Rehab and at the Troup County Jail. LaGrange Nursing and Rehab has had 56 resident cases and 22 staff cases, according to GDPH’s long-term care facility report. Almost 10 percent of Troup County’s cases have come from that outbreak. Nine residents of that facility have died, according to the report.

“Unfortunately, once it’s inside the facility, it can spread rapidly,” Folden said. “We may see more positives from that, just from spread within the facility. We’re still keeping an eye on that. It’s easy to spread from place to place, especially if there are people moving around, within the facility.”

On May 27, Troup County Sheriff’s Office announced that the jail had at least one inmate with COVID-19.

Folden said that the numbers in the system do not truly reflect the number of positive cases and deaths.

“We are going to have some more because there are some that have not been put in the system,” Folden said. “It gives you an idea of what’s going on, but it’s not 100% accurate for the moment.”

Twelve of the 13 deaths in Troup County have occurred in individuals 57 and older.

Nine of the victims have been black, three have been white and one has an unknown race at this time.

Folden said that the increase reinforces the need to follow public health recommendations:

-Practice social distancing; keep at least 6 feet between yourself and other people even while wearing a mask.

-Wear a mask; The CDC now recommends the use of face masks to help slow the spread of COVID-19, especially where social distancing is difficult to maintain (grocery stores, pharmacies, etc.), and especially in areas of significant community-based transmission.

The CDC also advises the use of simple cloth face coverings to slow the spread of the virus and help people who may have the virus and do not know it from transmitting it to others.