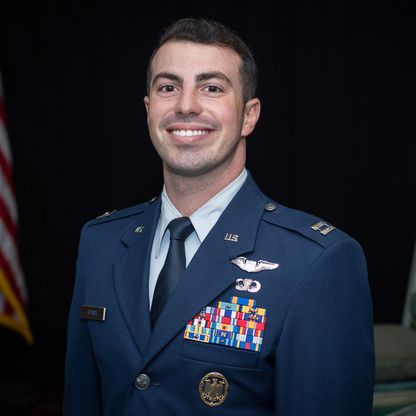 Air Force Captain and LaGrange native Julian Gluck was named to the Forbes 30 Under 30 list earlier this year in the law and policy section.

Due to this selection, he was invited to participate in the Under 30 Detroit Hackathon, which was a virtual collaboration to create a solution for inner-city Detroit. Gluck, who graduated from LaGrange High School in 2008, said the individuals on the list typically are invited to a conference. However, due to COVID-19, that wasn’t possible. He said Forbes decided to put together individuals with different backgrounds to propose solutions to problems.

Gluck said the focus was on improving supply chains and how that could help alleviate  social inequity. After learning a bit about the individual issues, Gluck said combating food waste and scarcity was a problem he felt he could tackle.

I’ve seen especially on massive scales, with institutional dining facilities, how much goes to waste,” Gluck said. “You can also see the challenge for people that are facing hunger, whether in the United States or overseas.”

He said his team came up with different proposals, but his original idea was to engage in social entrepreneurship with urban farming and turn to local experts to teach the underprivileged communities in Detroit.

Gluck said other ideas included thoughts about food trucks that transported food to underserved areas. Eventually, the group came up with a food chain idea for a nonprofit organization to implement. According to the Forbes website, the plan starts with suppliers like restaurants, local farms, grocery stores and cafés to list the food available for distribution. The distributors with established networks can log on, see where the supply is, and contact those suppliers to pick up food. Families are then able to register online with their address and upload information about their food needs. The distributors can see which neighborhoods have received their food orders and which regions are still in need on a map.

“We’re doing the brainstorming and ideation for being able to get possibilities off the ground,” Gluck said. “With any sort of sustained philanthropic or business endeavor, you got to have people on the ground who are going to dedicate significant time to fully realize the project.”

When thinking about the idea, Gluck reached out to another LaGrange High School graduate, Claire Nichols, who is a registered dietician who serves as the Statewide Education Programs Coordinator for the Oregon Food Bank. He said her experience helped bring an understanding of the nonprofit and food education world.

“That little LaGrange connection ended up providing some great data insights for our project,” Gluck said.

Working on large issues like food scarcity in a metropolitan area like Detroit has its challenges already, but doing so virtually from a home office brings more limitations to the work, Gluck said.

“That’s when people have to realize that this was a proposal that was created by young leaders in a weekend,” he said. “And any sort of sustainable project requires a large commitment by people there to be able to execute.”

However, he said there were several professors, community organizers and local leaders from the area who were accessible to them and painted a picture of the problems there.

“What I found is the important thing is to talk to stakeholders to individuals who are there because in the absence of being able to be on the ground in these communities to talk to people, especially with an accelerated project where you only have one week, you have to be able to get in there and talk to people from the area,” he said.

Gluck said he enjoys working projects that could yield tangible results to help people, especially knowing the outcome was the product of many different backgrounds.

“I’ll take this experience, and as I learn from this one and grow, I’ll continue to move to my next project to try to change the world in a positive way,” he said.