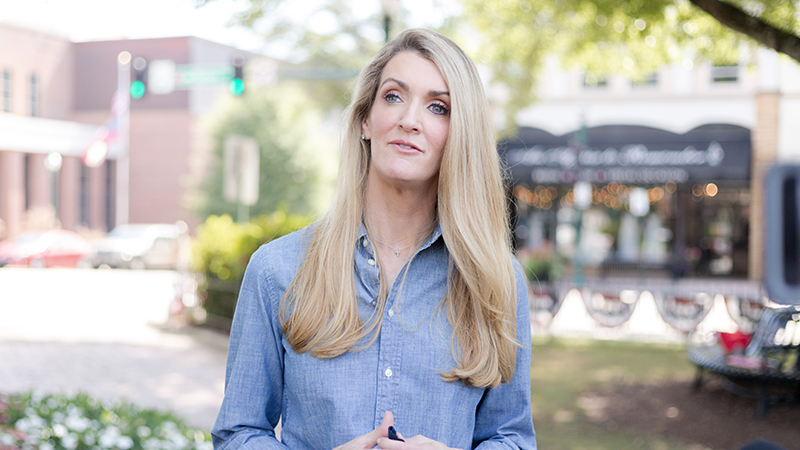 U.S. Senator Kelly Loeffler, who is running for re-election, spoke at Lafayette Square on Thursday morning, campaigning for votes as the November special election draws nearer.

Loeffler addressed her stance on the Black Lives Matter movement and gun control.

“We all agree there’s no room for racism in this country,” Loeffler said. “We have to leave it out, but unfortunately the roots of the organization BLM stand for defunding the police. They want to disrupt the nuclear family, they are anti-semitic, they are promoting violence across our country, and I don’t believe that will help bring our country together and unite us.”

Loeffler co-owns the WNBA’s Atlanta Dream and has drawn scrutiny for calling on the team to drop support of the BLM movement. The team has been seen putting “Black Lives Matter” and “say her name” on warmup gear and uniforms.

“I think sports has such uniting power,” Loeffler said. “I think using it to unite people rather than align with a potentially very divisive and problematic organization, can really hurt our efforts to root out any racism. Every Georgian deserves the right to speak out and not be canceled for speaking out.”

Loeffler says she plans to strengthen the second amendment.

The GOP Act would ban the use of federal funds to store personal information collected during background checks attached to gun purchases.

“It makes sure that you as a gun owner are not targeted by federal officials,” Loeffler said. “That you can keep your own weapons without being tracked in a data base.”

Loeffler introduced the Bring Entrepreneurial Advancements to Consumers here in North America (BEAT CHINA) Act to the senate in June. The act serves to incentivize pharmaceutical, medical and supply manufacturers to relocate to the United States.

“We have to hold China accountable,” Loeffler said. “If we are going to put America first, then it has to be made in the USA. We have to bring those jobs back.”

Loeffler’s stop in LaGrange is part of a two-week tour of Georgia that she is doing of more than 20 counties.

“Getting to Troup County was really important to me,” Loeffler said.

“West Georgia is so important to our economic engine and our state. If you look at all the activity that happens here, it facilitates a lot throughout the state.”

Loeffler, who grew up as a farmer, said she shares a lot of values that Georgians share.

“I share the value of faith, family and hard work,” Loeffler said.

“That’s what I see embodied here. That’s the message I’m taking out on the road, and we have great momentum because I think Georgians see that I understand and that I only went to Washington to fight for them.”

There is no primary in the special election for U.S. Senate, so Loeffler is in a free-for-all election with numerous other candidates. Doug Collins, also a Republican, was in LaGrange and West Point campaigning Tuesday.