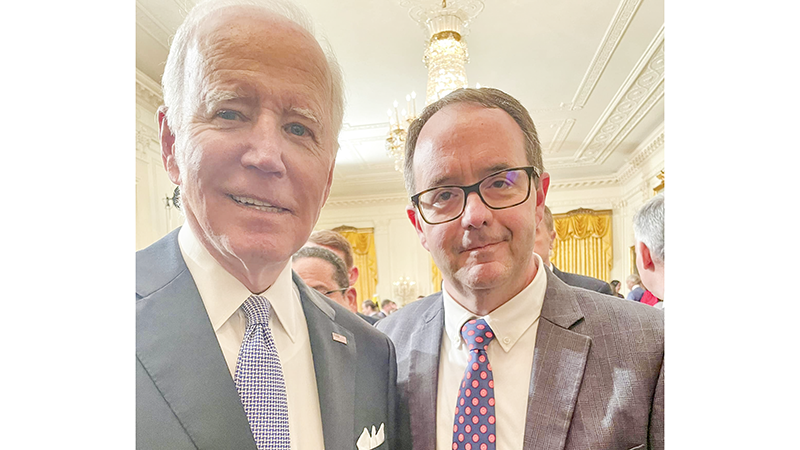 President Joe Biden invited LaGrange Mayor Jim Thornton, along with other state and local elected officials from across the country, to join him and several members of the nation’s law enforcement community at the White House this week.

The occasion was to discuss the President’s plans for improving public trust in law enforcement and enhancing public safety. After months of discussion among the White House and police organizations, including the International Association of Chiefs of Police and the Fraternal Order of Police, Biden signed an executive order to “advance effective, accountable policing and criminal justice practices.”

The order, which was signed May 25, strengthens federal “patterns and practices” investigations over local agencies, mandates the use of body cameras by federal agents and requires all federal law enforcement agencies to implement new use-of-force policies, consistent with new guidelines issued by the Justice Department earlier this week. It also bans the use of chokeholds and limits the use of no-knock warrants by federal agents.

While the order is exclusively targeted toward federal agencies and does not directly affect local police, Thornton noted that many of the recommended strategies are already in place at the LaGrange Police Department.

“Many of the initiatives that the President announced, such as mandatory use of body cameras, data collection and de-escalation techniques are things that the LaGrange Police Department has been doing for years,” Thornton said.

With this being said, Thornton did think that some of Biden’s new policies “have potential” for our local police, specifically in regards to the prioritization of officer wellness and the prevention of officer suicide.

“As we see regularly on the news, when a crisis hits a community it affects more than just the victim and the offender. We need to find better ways to help community members and officers deal with those traumatic events,” Thornton said.

Overall, Thornton hopes that President Biden’s leadership will be effective in improving the relationship between police and the communities that they serve.

“We all want to see the relationship improved because a better working relationship with the community makes the job of law enforcement easier and more effective,” Thornton said. “Time will tell if these initiatives help, but it is encouraging to see the White House working closely with national law enforcement groups to develop strategies.”