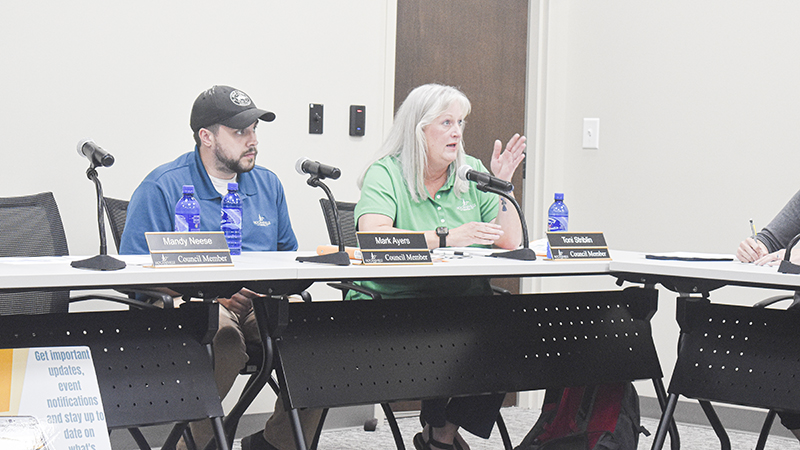 HOGANSVILLE — The Hogansville Town Hall  — the first of its kind in the city since the election of its new mayor and two additional councilmembers — opened a forum to residents to express grievances and concerns on inner-city issues.

Roughly a dozen residents attended the Town Hall Thursday night to inquire the council’s plans on issues such as water, development and — as one resident pointed out — unresolved issues.

“I can say, the position that we’re in, we are defiantly moving forward to address these issues,” Ayers said. “They’re not going to happen overnight. We’re doing our best to address these things, and we’re looking into every area of our city and asking ourselves, whether it’s kudzu, tall grass, water or broken sidewalks, we’re addressing them as much as we can.”

Resident Christopher Yarbrough, who lives on Main Street, asked the council on the city’s water-related issues. Yarbrough said he constantly has issues with his water pressure and at times has pressure so low he can not run water at all.

“I have never lived in a city that doesn’t have water pressure,” he said. “It’s so frustrating.”

Interim Hogansville city manager Lisa Kelly said the water pressure issues in the city are related to the use of water tanks near Meriweather County and the interstate which, due to their size and proximity to Hogansville, takes in a great deal of water when used. Yarbrough additionally noted he had a drain right in front of his property that floods when it rains, creating a safety hazard for passing cars and residents.

To accommodate this issue the city of Hogansville recently accepted bids for a backbone water line. Kelly said this line will extend at Hwy. 29 from Bass Cross Roads and pull a water main to the interstate area. Ultimately, the line will restore water access and address the pressure issue Yarbrough and other residents in his area face. Due to supply issues, the project will not begin for another six months or so.

Councilmember Toni Striblin, who has served on the Hogansville City Council since 2019, said the city is currently working to remedy piping issues.

“We’re taking every section and replacing them correctly,” Striblin said. “That has saved us [30%] of our water loss going forward.”

She said a recently built subdivision caused flow issues from Yellow Jacket Creek. Instead of flowing into pipes on her property, the water instead sits in her yard, causing areas of the property.

A ditch adjacent to Rutledge’s property, she said, floods when it rain.

Rutledge additionally brought up general maintenance issues in the city such as kudzu overgrowth and tree limbs in the street.

She said she felt the city’s attention was being focused on downtown Hogansville’s commercial development.

“[Development] is all fine and dandy, but fix what’s already broken,” Rutledge said.

Ayers said he was not sure why the Facebook post said the lake was closed due to inclement matter. There had been a situation at the lake in which a manhole had caved in and caused a blockage.

The goal, she said, is to extend fiber lines further into the city.