Debt 101: How the City of Hogansville got into debt 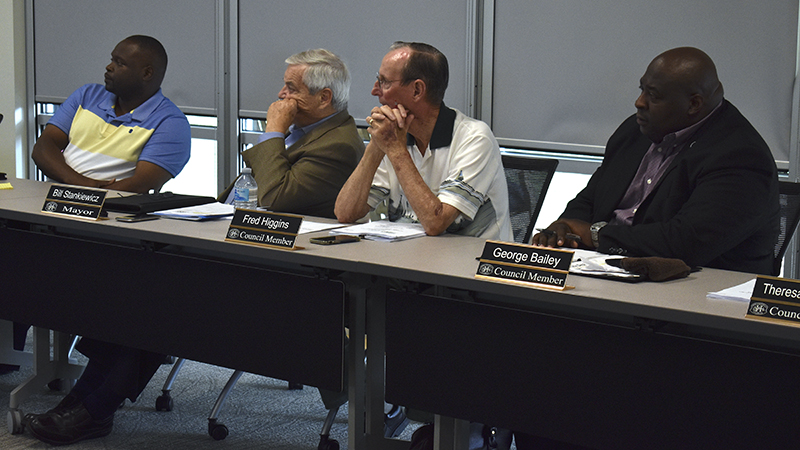 The City of Hogansville’s debt was discussed at its Town Hall meeting Thursday at the Hogansville Public Library. City Manager David Milliron presented how the city will soon have a debt of $14,720,274.

“Basically, what it was was a refinance of an existing bond to get some additional leverage on interest rates except this one covered all enterprise funds, meaning that it took holistically all of the utilities into a pledge, and we refer back to this which is the Sprayfield and Land Application System,” Milliron said.

Milliron said the bond was to pay for sod for the city. It was believed at the time that the system would provide revenue for the city. However, it did not.

Milliron said the city is paying interest only, and the Municipal Electric Authority of Georgia is paying principal. The payments end in 2023, and Hogansville has a balance of $2.95 million.

“This is the one that gives me heartburn,” Milliron said. “Currently, we are reimbursing MEAG for making principal payments on those Series 1993 bonds.”

Milliron said Hogansville will begin paying escalated principal and interest in Oct. 2024. The payments to MEAG will end in Oct. 2040, according to Milliron.

“When [the city] did this, there were some calculation errors done in the revenue bonds as to how much money they needed, and they had to go back to the well again,” Milliron said.

In June 2006, the city received a $256,730 loan from the Georgia Environmental Finance Agency to improve its water and waste water system.

“GEFA is a state agency that is a financing authority,” Milliron said. “They work with utilities, and we refer to this as GEFA loan number one.”

Hogansville’s second GEFA loan was taken April 2012. Milliron said the cost was for the steel gas pipeline elimination project. The loan was $348,475.

The bulk of these loans and bonds are being “scrapped off,” according to Milliron.

“In Las Vegas they throw craps and yank it off,” Milliron said. “Well they’ve been yanking it off instead of maintaining the systems, and when I say ‘they,’ I mean professional management.”

The newest debt Hogansville will gain is for a USDA waste water treatment plant upgrade, Milliron said. The sewage is system had exceeded the capacity of its current plant and has to build a new one in order to continue to meet health standards.

The upgrade/expansion costs $8,688,195. According to Milliron, a USDA grant would pay for $2.5 million. In a previous agreement, Hogansville will also sell 25 percent of the plant to Meriwether County, which will pay $1.6 million, Milliron said.

The state mandated that the plant will pump 1.5 million gallons a day plant and will take Meriwether’s sewage from their industrial area, according to Milliron. Under those conditions, Hogansville will only have to pay $4,588,195 of the total amount.

“Under Georgia law, the city cannot file for bankruptcy,” Milliron said. “You don’t have municipal bankruptcy in Georgia. The city could relinquish its charter, but the debt would still be due.”

Citizen James Shambles asked how bad of an impact all of the debt would have on the city. Hogansville Mayor Bill Stankiewicz said there were several ways out of debt, but he could not be specific because of ongoing negotiations.

“There’s several alternatives that will alter that debt picture,” Stankiewicz said. “I can tell you personally I lose sleep over it. I wake up in the middle of the night, and I’ll start thinking about this debt situation, and it just drives me nuts.”

To review the master plan along with other topics discussed at the meeting, visit Cityofhogansville.org.