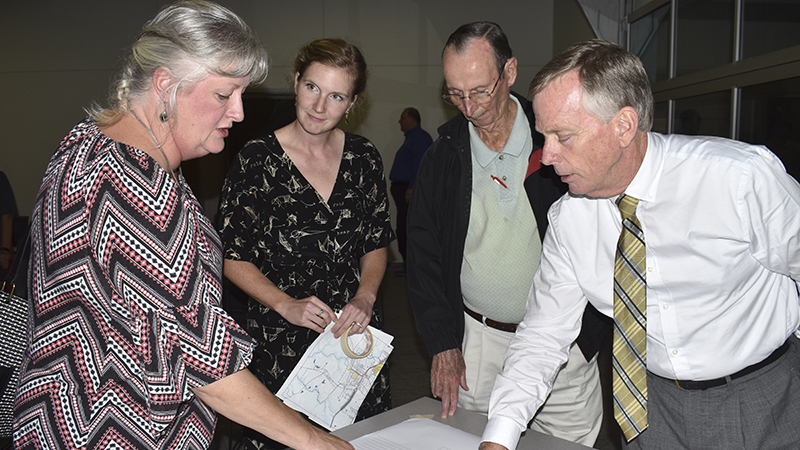 After developing a downtown masterplan for the city of Hogansville, the Georgia Conservancy was back in the city Thursday night for a forum on corridor plans. The conservancy evaluated and made ideas for the corridors that lead into Hogansville.

The Georgia Conservancy received a $35,000 community asset planning and design services grant from the Callaway Foundation for the corridors, according to Johanna McCrehan, the conservancy’s urban design lead.

“We are definitely building from the themes, understandings and assets that we found as part of the downtown masterplan,” Moore said.

Moore said they wanted to build off of the corridors and enhance and protect them, from adding sidewalks to trees and paths.

“There are aspects of Hogansville’s corridors that are very unique and very special and speak to your small-town atmosphere,” Moore said.

McCrehan said for the northern corridor that goes past the mill and by the Hogansville Public Library, they would focus on how to keep it rural. McCrehan said they would want to clear a parcel of land across the mill by the library.

“I know we’re close to downtown now, but what we were looking at is lands that were available thinking about the long-term future,” McCrehan said. “This is a little different than the masterplan because we haven’t gotten to the recommendations yet, but also we’re thinking long-term planning right now.”

McCrehan said they conducted a housing assessment of the mill village to see what they could protect.

For the east corridor, Moore talked about how travelers come in from the highway, which connects to the downtown and the connection with the DASH apartments on Lincoln Street. Moore suggested making a roundabout at the intersection by Lincoln Street, SR 100 and Mountville Hogansville Road.

“This really isn’t terribly problematic from a traffic engineering standpoint, but we do know that this is not a T-intersection,” Moore said.

Moore said the small roundabout would have a hummingbird statue in the middle to accompany the city’s hummingbird theme. Other ideas for the east corridor included sidewalks for the community to walk to downtown, landscaping with trees and developing a further course north of Lake Jimmy Jackson.

“We think there’s, again, an appropriate place to introduce some protection of that rural corridor, but also, it has got a lot of the industrial history of Hogansville,” McCrehan said.

For the south corridor, McCrehan suggested the city adopted an industrial mixed-use district, where people move in old buildings. McCrehan also mentioned maker spaces with people living in the back of their stores.

For the west corridor, Moore mentioned the splash pad at Strozier Park as an asset. From the park, Moore suggested adding trees, expanding on the parking lot and adding walking areas.

Hogansville Mayor Bill Stankiewicz said at the forum that the Troup County Board of Commissioners mentioned during their meeting Thursday morning adding parking spaces to the park.